We are a congregation of the Evangelical Lutheran Church in America (ELCA).

We are Christ-centered – in worship, in learning, in service, and in life. We care about one another and our community, both local and global, and we seek to share God’s love with the world. We come together to welcome all people into a community of God’s grace, to nurture disciples who live in faith, to equip witnesses who share the Gospel, and to send people to serve in love.
You are welcome here!

Pastor Gregg comes from Wheeling, West Virginia. He is a lifelong Lutheran, the denomination that empowered him to explore and grow in faith. During his high school years, he served as his home congregation’s organist. He studied Psychology at West Liberty University, working as an intern for the university’s Protestant Campus Ministry, and gained experience supply preaching for several small Methodist congregations as a result. He attended Lutheran Theological Southern Seminary in Columbia, SC. This is where he met Pr. Rachel, and they were married before starting their senior year. During seminary, he served as the Vicar at Lutheran Church of the Nativity in Arden, NC, and after graduation, he was called there as one of their pastors, specializing in Worship, Pastoral Care, and Administration. In the fall of 2018, Grace Lutheran Church called Pr. Gregg and he began serving here in December of that year. When he is not occupied with church work, Pr. Gregg enjoys spending time with Pr. Rachel, visiting local breweries, playing the organ (though his skills are a bit rusty), going on hikes, and exploring Rock Hill – the new area that he and Pr. Rachel call home.

Pastor Gregg serves Grace Lutheran Church as its Senior Pastor. Working alongside the rest of the staff and the Congregation Council, he functions as the lead pastor for the following:

Pastor Rachel is originally from Simpsonville, SC, and was baptized, confirmed, married, and ordained all in the same Lutheran congregation. She earned a degree in Religion at Furman University and then went to Lutheran Theological Southern Seminary in Columbia, SC. This is where she met Pr. Gregg, and they were married before starting their senior year. During seminary, she was the Vicar at All Saints Lutheran Church in Huntsville, AL. After seminary, she was called to Lutheran Church of the Nativity in Arden, NC, to serve as one of their pastors, specializing in Faith Formation, Youth, Outreach, Stewardship, and the congregation’s Preschool. In the fall of 2018, Grace Lutheran Church called Pr. Rachel and she began serving here in December of that year. Pr. Rachel enjoys exploring new places with Pr. Gregg, time at the beach, Harry Potter movie marathons, and great restaurants.

Pastor Rachel serves Grace Lutheran Church as its Pastor. Working alongside the rest of the staff and the Congregation Council, she functions as the lead pastor for the following:

Dr. Jeremy Mims grew up in Texas and moved to Rock Hill in 2017 for a faculty position in the music department at Winthrop University, where he is the Director of Choral Activities. Jeremy earned his Doctorate in Musical Arts in Conducting at the University of Missouri-Kansas City Conservatory of Music & Dance and has served as musical director, chorus master, and accompanist of shows for various professional, collegiate and local theatres and opera companies. A musician of multiple talents and diversity, Jeremy has appeared on national and international concert and opera stages as a conductor, collaborative pianist, violinist, and a tenor chorister. Under Jeremy’s leadership, the music program at Grace is thriving. Jeremy and his husband, Craig, live in Rock Hill.

Our WELCM Campus Minister is Olga-Maria Cruz, who holds the BA in English, the Master of Divinity in Theology, and the PhD in Christian Ethics. In her previous work at Saint Leo University in Florida, Olga-Maria created an ecumenical campus ministry where none existed, led a Bible study for the men’s basketball team and created a vocational discernment retreat in collaboration with the Office of Career Services. She also taught for twelve years at Bellarmine University in Louisville, Kentucky, creating  courses in Ethics, Philosophy, Literature, and Women’s Studies. She is also a writer, musician, and yoga/meditation instructor.

The Council represents the congregation in most areas of decision-making and is responsible for the business affairs of the church. All members are eligible to be elected to serve on the Congregation Council. Council members are elected at the annual meeting held in November and serve staggered three-year terms. Any member of the congregation is welcome to attend Council meetings, which are currently held on the third Sunday of the month. 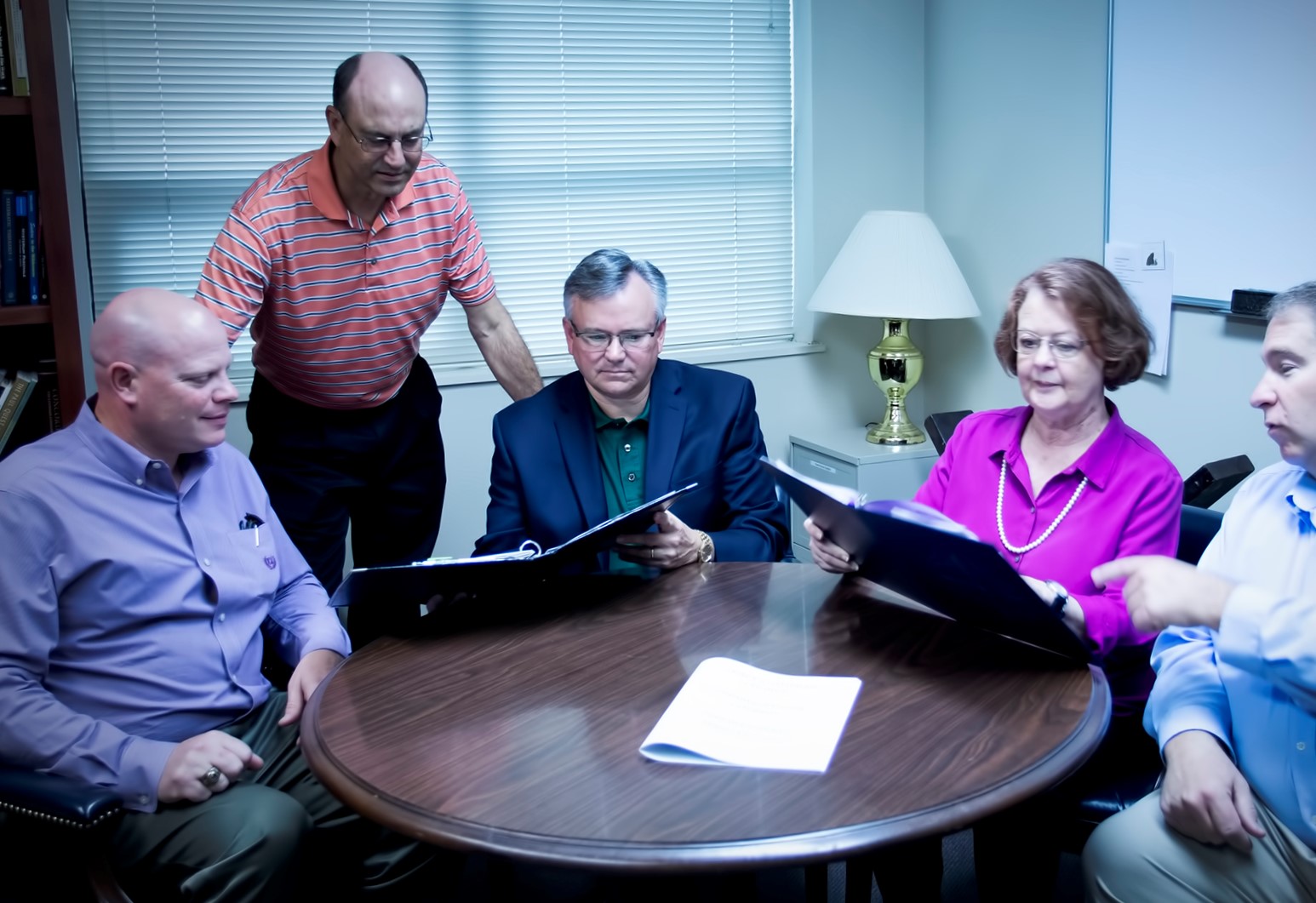 Martin Luther summarized the foundational principles of Christianity in the Small Cathechism.

Click on this link below to see a digital copy of this work.

We are one of the 154 Lutheran congregations in the South Carolina Synod, one of the 65 synods in the ELCA.

Grace Lutheran celebrated 95 years of ministry and mission in 2018. We look ahead with anticipation as we look back at a rich past. Click the button below to read more about our church history.

At Grace, the Congregation Council is made up of 12 members of the congregation, in addition to the pastors.

In addition to the Council positions listed above, Grace's Finance Committee has four officers:

Grace Lutheran Church was founded in 1923 to serve Lutheran students at Winthrop College. The gray stone church on Oakland Avenue cost $38,000 to build and opened its door on May 2, 1926. The first pastor was H.A. Schroder. For two decades, Winthrop students and local community members each made up half the congregation. The congregation acquired a parsonage in 1954 and later purchased a house adjacent to the church. In 1955, the congregation painted the doors red to symbolize "Blood of Christ and the outpouring of the Holy Spirit." The red doors continued to be a landmark for the town and a welcome to all those who wished to worship within. In 1963, the year Grace Church celebrated its 40th anniversary, there were 238 baptized members and 158 confirmed members. Extensive exterior and interior renovations were done in 1968. The congregation installed a Zimmer pipe organ in 1975 and purchased more surrounding property in 1979. In 1987, a second Sunday morning service was added, a handicap ramp was installed, and handbells were purchased for the music program. In 1989 property for increased parking was purchased, and in 1998 the house behind the church on Aiken Avenue was given to the congregation. Known as the "White House," it currently serves as our campus ministry center. During the 2002 renovations, the church's original sanctuary, seating 230 people, was enhanced with a new chancel arrangement and a magnificent pipe organ. At that time 14,000 square feet of new space, including a fellowship hall, was added to the existing building. In 2013 the congregation purchased "A Place of Grace," an adjacent building that now houses a variety of local non-profit agencies.

Detailed church history from 1923 to 1998 is available here. (Written by Naomi Bridges and Martha Seigler) For additional information, consult History Matters, Congregational Histories 1824-2017, published by the South Carolina Synod in 2017.